According to the latest report by the Centers for Disease Control and Prevention, the flu season in this year is still occurring with around 19 million people being diagnosed in the country.

After a short decline in several weeks at the beginning of 2020, the number of cases has increased again. Until now, there are still no clear signs that the flu season has reached its peak.

A large number of diagnoses were reported in almost all states in the country, except Hawaii.

In general, the Centers for Disease Control and Prevention estimates that there have been more than 180,000 hospitalized cases this flu season. Among these, up to 68 kids have died.

The beginning of the flu season was relatively oddly after an unexpectedly early occurrence in a B form of the microorganism. Scientists believe that this strain tends to have more effects on younger people.

But over the past few days, new cases of H1N1, a form of flu A, have been reported. Many doctors witness a significant surge in flu A.

The United States is in the peak of the flu season. Several typical signs include body aches, sore throat, headache, chills, as well as fever.

In addition, the Centers for Disease Control and Prevention measures that there have been around 10,000 deaths caused by the flu this year, including a father of four young sons.

Sven Heinnold, a 35-year-old citizen of Orange County, California, died of the flu a few weeks ago. He coughed several times, but there were not any bad symptoms.

After a few days, Sven was hospitalized with many flu-like signs. He suffered from some serious complications like pneumonia. Doctors said that an undiagnosed, preexisting health issue also led to his susceptibility to the flu.

The best way to prevent the flu viruses is to wash your hands thoroughly.

If you become ill, it is advisable to stay at home for at least 1 day after the last fever symptoms have disappeared, without drugs that would mask the condition. In addition, make sure to sneeze or cough into a sleeve or a tissue. Do not touch the face with your unwashed hands.

Many respiratory viruses would survive for a limited period on some surfaces, such as drawer pulls, keyboards, phones, or door knobs.

A flu season typically lasts from April to May. However, the effectiveness of the flu vaccine in this year is still unknown. 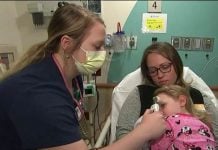 Unexpected Virus Causes a Fast Start of the Flu Season

Health News
The winter flu season in the United States starts earlier this year than the previous 15 years. An early breakout of disease in southern states has started to spread more widely, and it is likely that this flu season would...