The winter flu season in the United States starts earlier this year than the previous 15 years.

An early breakout of disease in southern states has started to spread more widely, and it is likely that this flu season would reach its peak earlier than usual.

The nearest season to approach this level was in 2003. And it was a severe year. That’s why many public health officials believe that the early start this year might lead to plenty of problems.

“It might depend on the circulating and spreading virus groups. There is not a predictable trend up to now,” said the spokesperson of the US Center for Disease Control and Prevention (CDC).

There are many forms of viruses causing flu. However, the one that is triggering illnesses in many states is unexpected. It is a strain that usually does not activate until March.

The good news is that it is not as dangerous to the elderly. This is very important because many deaths and hospitalizations during the winter are reported in older people. Nevertheless, this virus would have significant effects on younger people and kids.

The first state to be affected by the outbreak was Louisiana. A large number of cases were first reported in October.

The main hospital in New Orleans has already had more flu cases this season than the previous one. Last month is the busiest period ever when the hospital must add more shifts and have a triage system.

“It is certainly triggering signs which would lead to hospitalizations for one week, including diarrhea, vomiting, or fever,” said the chief of the hospital.

In general, a flu season is often considered to be underway if a noticeable part of the doctor visits is due to flu illnesses. In addition, this condition must last more than 3 consecutive weeks. Both requirements are met this week, according to the latest report by the CDC.

On Friday, it is estimated that there were more than 1.7 million illnesses caused by flu in the United States, with 900 deaths and 16,000 hospitalizations.

The most serious situation happened in 6 states, which stretch from Georgia to Texas. But the latest report suggested that the number of states affected by the outbreak was up to 12 up to now.

Last year, the flu season began mildly but then became the longest one in a decade. It finished with more than 590,000 hospitalizations and 49,000 deaths. 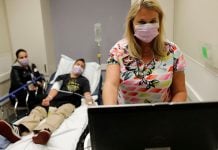 Health News
According to the latest report by the Centers for Disease Control and Prevention, the flu season in this year is still occurring with around...