Polio is one of the few and highly contagious infections that scares everybody when its eruption is reported somewhere. It’s also referred to as infantile paralysis and also poliomyelitis. It is a disease caused by a highly contagious virus that targets the nervous system, thus causing paralysis and muscle weakness, which results in the inability to walk. You find that in less mild cases, it affects the neck, head, and diaphragm, causing the nervous system to fail and respond. Polio causing virus highly targets children under five years who are likely to contract the illness than any other group. To help you out in detecting Polio infection, here are the 10 Signs of Polio.

Feeling headache is usually a common sign of abnormalities or unusual conditions processing to explode within the body of the individual but also one of the significant signs of Polio. The headache involves a feeling of pain around any part of the head, neck, and scalp. The individual starts feeling an acute migraine after the virus attacks after a few hours. The individual may feel some tension and clusters as the virus attacks the various parts of the body. It is, therefore, necessary to seek medical attention as soon as possible if one experiences unusual headaches, especially if some cases of Polio have been reported within your area. [1] 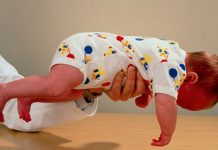 Ailments & Conditions
What Is Prader-Willi Syndrome? Prader-Willi syndrome is a genetic condition that can be passed from parents to their children. It is mostly present at birth,...