Omega-3 refers to a group of polyunsaturated fatty acids. They play a key role in many body functions, especially cognitive functioning and heart health.

There are 3 main forms of omega-3: DHA, EPA, and ALA. They can be taken through supplements or the diet. Some foods with high levels of these fatty acides include seeds, nuts, and fatty fish.

A recent study has found a link between higher intake of omega-3 and better brain health in those who are in midlife. All findings were published in the Neurology journal.

In this cross-sectional study, scientists from the University of Texas Health at San Antonio examined nearly 2,200 participants who are 46 years old, on average. All of them did not have a history of a stroke or dementia.

They drew and analyzed blood samples from participants to measure the levels of omega-3 in the blood. In addition, a MRI scan was performed to evaluate their brain functioning.

Researchers focused on the amount of white and grey matter in the brain of participants, especially the hippocampus, an important region for memory and learning. A lower amount may indicate the presence of dementia.

The results suggested that 1 out of 4 participants had low levels of omega-3. The others had high omega-3 levels.

The authors noticed that people with high levels of omega-3 were more likely to have higher amount of matter in the hippocampus and better cognitive functioning. Conversely, those with low omega-3 levels tended to have diabetes, be smokers, and be less educated.

It is worth noting that similar studies have been done in older people. However, the authors claim that it is still important to see the effects of omega-3 during the midlife period as people begin to experience cognitive decline during this time.

Overall, findings from this research implicate that we may improve our brain health by making certain dietary changes. If consuming more omega-3 sources, such as salmon, tuna, seeds, and nuts, would help with dementia prevention and cognitive improvement, it would have a significant effect on public health.

Everything we eat or drink has an effect on the brain. Indeed, numerous studies have emphasized the association between the diet and brain health. Further research is necessary to learn more about the impact of omega-3- on people in different age groups. 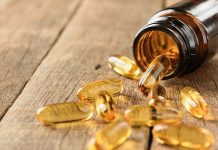 Health News
Many studies have found a link between omega-3 and vitamin D consumption and a lower risk of autoimmune illnesses. Recently, scientists from the Brigham and Women’s Hospital in Boston have conducted a large randomized controlled research to verify this association. The...